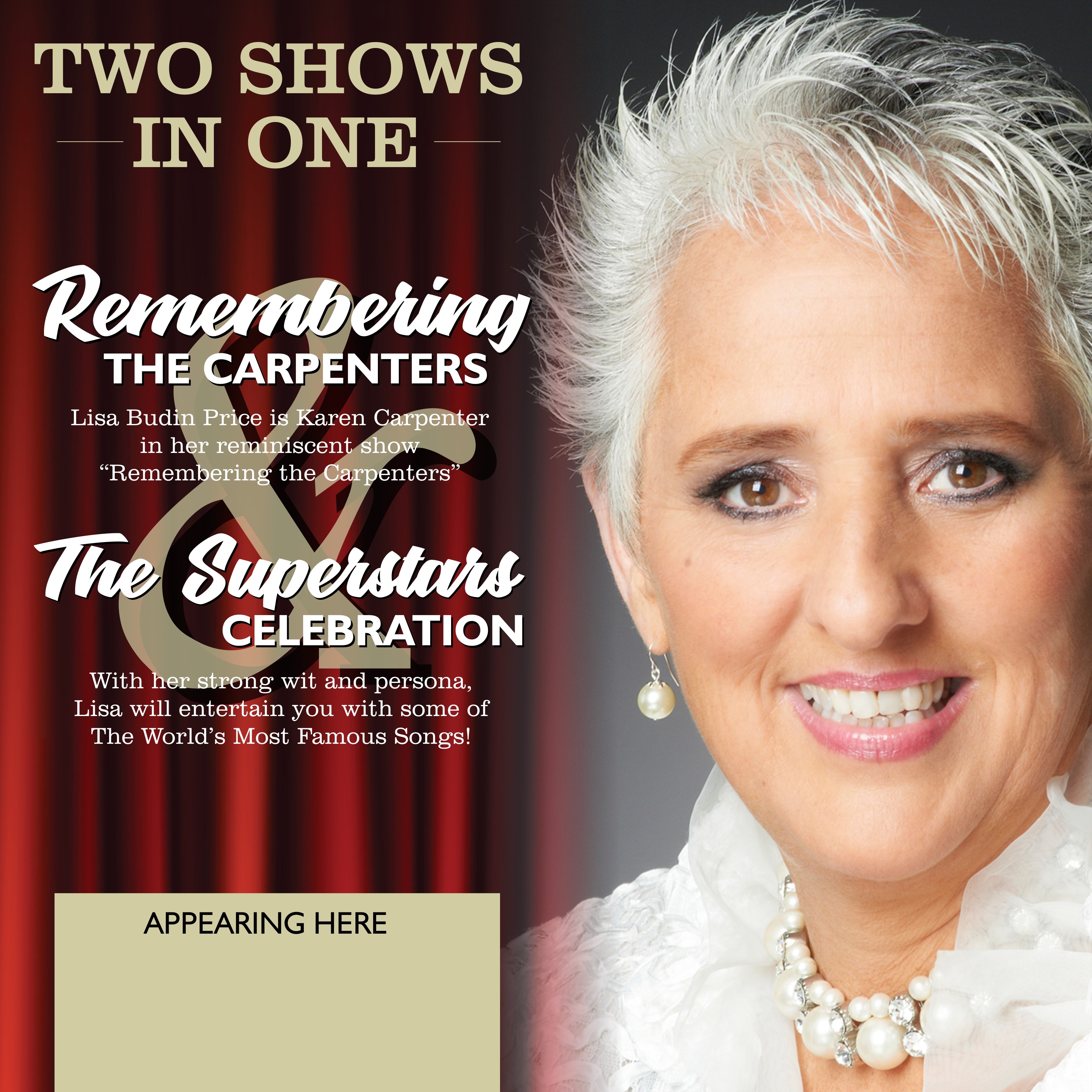 Remembering the Carpenters & The Superstars Celebration

$35
Doors open 7.30pm Show at 8pm
Must be 18 years or over and fully vaccinated with proof on the night!

This is a two hour show where songstress Lisa Budin presents the story of the Carpenters with her golden smooth voice. Lisa is an incredible performer that ropes the audience in with her stories and her weaving in and out of the audience performing directly to the adoring attendees and she does Karen Carpenter proud with her renditions of the Carpenter’s chart topping hits. Expect to hear: Rainy Days and Mondays, Top Of The World, Yesterday Once More, Please, Mr. Postman, (They Long To Be) Close to You, We’ve Only Just Begun, Sing, and many more.

The second half of the show is a sing along to The Superstars Celebration with songs including - I just called to say I love you, Killing me Softly, Colour my world and many more. 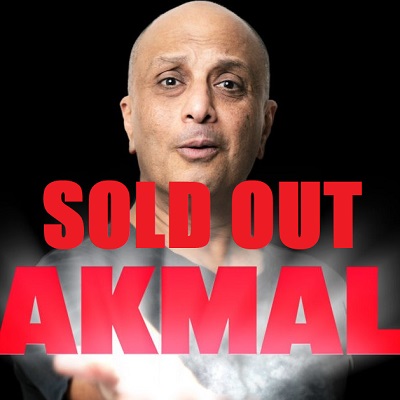 Anyone whos experienced a live AKMAL show knows the charmingly deranged energy this hilarious national treasure brings to the stage.

Now imagine AKMAL cooped up for months inside his own house during lockdown - forced to stare at the wall muttering madly to himself instead of into a mic. The thoughts swirling but never getting OUT. The unreleased funny building to a critical mass.
Oh Boy!
Thankfully, it's time for AKMAL to explode onto the stage once more... and God only knows what crazy thoughts he's cooked up in confinement!

SOLD OUT! POSTPONED UNTIL SATURDAY NOVEMBER 20 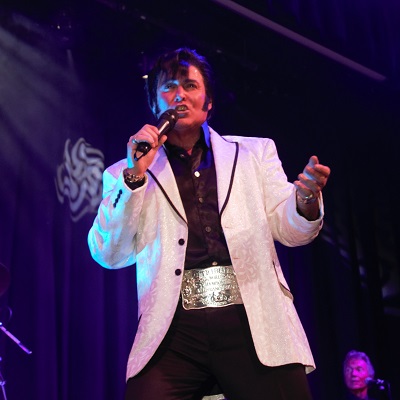 An Intimate Night With Elvis

Come and Relive the magical hits of The King Of Rock n Roll Elvis Presley in an exclusive intimate live show to remember starring the sensational David Cazalet.

Together with his Live Band you will be transported to the early 60’s and 70’s when The King Of Rock n Roll reigned supreme with massive hits like Blue Suede Shows, Love Me Tender, Suspicious Minds, Jailhouse Rock, It’s Now Or Never, All Shook Up and many many more !

David is a born performer who has loved the music of Elvis all of his life. His portrayal of The King is of a standard that has seen him perform in many of the world’s greatest showrooms.
David’s style, charisma and vocal gift leaves audiences spellbound.

Tickets are limited so please book early so as not to be disappointed.

Live Baby Live! The INXS Tribute Show is Australia’s premier rendition of one of the most iconic bands in Australian history. Live Baby Live! brings together a group of musicians that have a combined 40+ years experience playing music and performing live.

Live Baby Live! deliver a stunning replication of all the classic INXS tracks, performing songs from their first album all the way through to their latest hits. Frontman Guy Collings is a natural born performer and brings the late great Michael Hutchence to life on stage, bearing a striking resemblance to Hutchence in sound.

Bringing all these elements together, Live Baby Live! produce what can only be described as an amazingly accurate tribute to the mighty INXS.

With meticulous attention paid to the unforgettable INXS Live at Wembley performance and swagger to match, let Live Baby Live! Take you back to a time when rock and roll ruled. 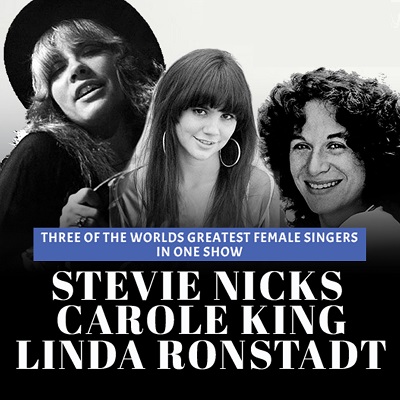 Stevie Nicks, Carole King and Linda Ronstadt are arguably three of the world’s most recognizable voices.  With combined record sales topping in excess of over 300 million units sold as well as an endless wealth of top 20 hits between them, they truly are three of the world’s greatest.

In this brand new tribute show, Melbourne singer/songwriter, Bloom, will have you experience the incredible hits that span several decades from the Grammy Award winning artists.
Stevie Nicks is best known as the vocalist and songwriter for Fleetwood Mac but is also a chart-topper in her own right. Collectively, her work both as a member of Fleetwood Mac and as a soloist has produced over forty top 50 hits and sold over 140 million records. She is celebrated as one of the world’s top “100 Greatest Singers of All Time” by Rolling Stone Magazine.
Hailing as one of the 20th century’s most successful female songwriters and having penned over 118 pop hits on the Billboard Hot 100, Carole King is also a New York Times best-seller for her memoir ‘A Natural Women’ and has also had the story of her life played out on Broadway for Beautiful: The Carole King Musical.  She has been inducted in to the Rock and Roll Hall of Fame and the Songwriters Hall Of Fame and recipient of a Library of Congress Gershwin Prize for Popular Song – the first woman to be honoured.
Linda Ronstadt is a name familiar with many and one that spans numerous genres. She is one of the world’s best-selling artists of all time whose voice and naive sex appeal have sold her in excess of 100 million records globally.  She has released over 30 studio albums, is the winner of 11 Grammys, three American Music Awards and one Emmy Award.
And then there’s Bloom, a singer in her prime belting out the songs of these three wonderful Women.  Bloom is highly applauded as one of Australia’s greatest power vocalists in her own right and has already garnered International acclaim for her effortless soulful vocal resonance of power vocalists Adele and Amy Winehouse with her Adele & Amy Songbook tour and more recently a national tour performing the hits of one of her idols in the Linda Ronstadt Songbook.
Some of the hits Bloom has handpicked in this incredible new show features some of Linda’s greatest hits including You’re No Good, That’ll Be The Day, Blue Bayou. Carole King’s I Feel The Earth Move, Natural Woman, It’s Too Late and Stevie Nicks; Rhiannon, Landslide, Dreams and many many more…
Come and be charmed by the Australian vocal powerhouse that is Bloom and celebrate all that is Stevie Nicks, Carole King and Linda Ronstadt.

A tribute to Frankie Valli and the Four Seasons

THE VALLIES are an all singing, all dancing tribute to Frankie Valli and the Four Seasons! Bringing to you hits like Oh What A Night, Sherry, Big Girls Don't Cry and Can't Take My Eyes Off You and many more, this all Australian cast take you back to the 60s, celebrating those boys from Jersey.

Along with the music of the Four Seasons, the show also pays tribute to boy bands of the 1950s and 60s including The Drifters, The Temptations, The Righteous Brothers, as well as the hits of Motown and even the Bee Gees!

A high energy show with power house vocals, slick dance moves, a live band and the best new talent Australia has to offer, The Vallies will have you on your feet, dancing and singing out “Oh what a night!”